Why Kites do not drift straight downwind

Having just finished Frank Chadwick's highly recommendable contribution to the Space:1889 and Beyond series of novels, I was left profoundly disturbed. Mr Chadwick, it appears, has succumbed to the voice of reason in the matter of nautical physics as applied to Martian cloudships.

To elaborate: in material published for the original edition of the Space:1889 games, High Martian cloudships (kites for short) have been depicted with rigging reminiscent of Earth sailing ships. See the three ships in the example below (courtesy of Uhrwerk Verlag, publishers of the German version of Space:1889) This is, in my humble opinion, aesthetically A Good Thing (TM). 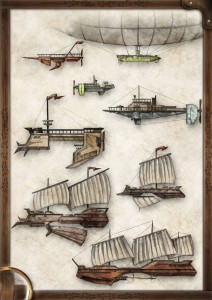 Admittedly, it does not pass any muster other than the aesthetic, though. How so? Wet sailing vessels work because they constitute an interface between two media: wind pushes against their rigging, and water pushes against their hull. Only because hull and rigging do not offer the same resistance (strength and direction) to the medium they are enveloped in, can a sailing ship convert this difference into movement. More specifically: movement in a direction diverging from wind or current. Thus a kite, being enveloped in one medium only (air) can plausibly only drift downwind, because it does not have any water to brace itself against and "divert" wind power for propulsion. Frank Chadwick, in A Prince of Mars, has done the sensible thing, and revised his concept of how kites work. Here, kites lift themselves to high altitudes by means of their liftwood lattices, pitch their bow downwards, reduce lift and use canvas sails (wings, really) extending horizontally from the kite's sides to glide forward. Plausible? Yes. Romantically reminiscent of the Age of Sail? Most definitely not!

This simply will not do for the game I want to present. So how can I reconcile vertical rigging to single-medium kites? Simple, by cranking up the old suspension-of-disbelief a notch and introducing another medium: the gravitational field. What if the liftwood lattices resist the gravitational field just like a keel resists water? 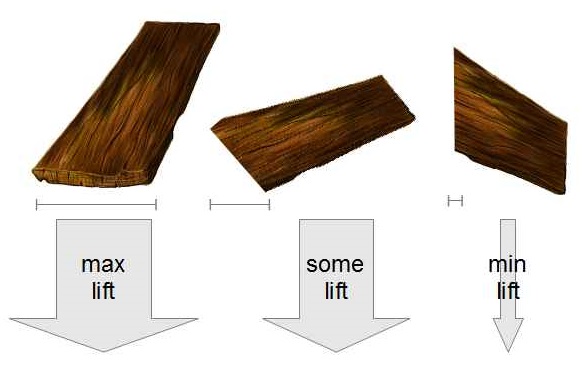 The picture above is a rough illustration of what a liftwood panel already does. To wit, it provides a force directly opposed to the force of gravity, which is proportional to the surface area of the liftwood panel as projected onto a plane orthogonal to the gravity vector*.

To make vertical rigging plausible, we need to add the following assumption: 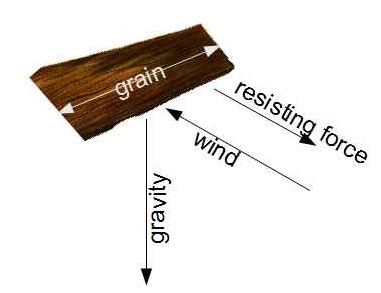 In addition to providing lift, liftwood also resists being pushed orthogonally to a plane defined by the liftwood's grain and the gravitational force acting on the panel. Figuratively, one might think of the liftwood lattices extending an insubstantial "gravitation keel"** straight upward and downward, parallel to the kite's longitudinal axis. If this gravkeel resists being pushed through the gravitational field, we have the same set up as in a wet sailing ship, allowing us to plausibly rig kites vertically, with towering pyramids of canvas, dont'cherknow.

I will close my ruminations here, as I can hear ominous creaking sounds issuing from my suspension-of-disbelief.


* Me old maths teacher would kill me for making such a hash of geometry nomenclature.
** Actually, it is more of a centreboard, not having any weight.
Eingestellt von Claes S Horsmann um 14:37

This blog chronicles material that I have written for role-playing and wargaming, and that I would like to bounce around the 'net. Also, I'll showcase miniatures and wargaming terrain.
In diesem Blog veröffentliche ich selbst Geschriebenes zu Rollenspiel und Tabletop, mal sehen, was das Netz damit anfängt. Außerdem wird es Bilder von Miniaturen und Tabletop-Gelände geben.